Filled with a multitude of historical, dining, nightlife and shopping attractions, there are plenty of ways to explore the vibrant city of Bangkok. However, if you’re looking for something a little off the beaten path, one of the more intriguing ways to see the city is by taking a run along one of the five picturesque routes located in the city’s most popular parks.

Scattered throughout the various districts with east access to the city’s mass transport systems, Lumpini Park, Chatuchak Park, Benchasiri Park, Santiphap Park and Benjakiti Park all offer a different perspective, enabling you to appreciate the many sides of Bangkok – with the added benefit of getting some invigorating exercise in. Now that more and more people are becoming aware of the benefits of an active lifestyle, there’s no better time to lace up your sneakers and start running in Bangkok. 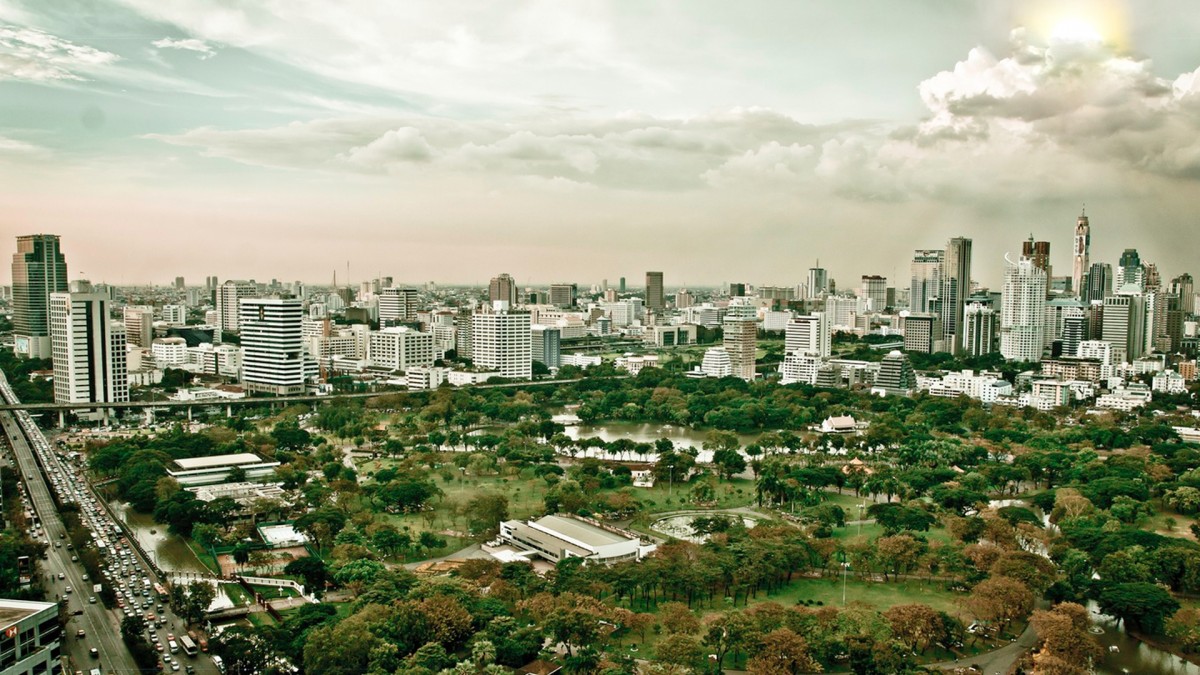 Conveniently located right opposite of SO/ Bangkok and covering 142 acres, Lumpini Park is an impressively large green space that offers a tropical oasis in Silom, the financial centre of Bangkok. Established in the 1920s by King Rama VI, Lumpini Park holds the distinction of being the first public park opened in Bangkok, as well as the biggest. There are plenty of grassy areas to host a picnic, offering scenic vistas of the central lake, along with shaded alcoves ideal for an intimate rendezvous.

For runners, maze-like pathways wind their way throughout, giving you one-of-a-kind peeks at Bangkok’s iconic cityscape. As you sprint around this Bangkok park, you’ll also come across other fitness enthusiasts taking part in their favourite past-times, whether that’s yoga, tai chi or cycling. When it comes to the natural scenery, you can expect the most varied range of exotic flora. One lap of this park covers a distance of 2.5km, which is especially ideal for long-distance runners to get their practice in. Lumpini Park is open from 5am to 9pm daily, and can be reached by both the Lumpini and Silom MRT stations.

Another one of Bangkok’s oldest parks, Chatuchak Park was opened in 1975 by the State Railway of Thailand. Despite being further away from the city centre than the other Bangkok parks on our list, this Bangkok park is still conveniently accessible via the BTS SkyTrain system, as it is located just off Mo Chit station. Featuring an ornamental man-made lake, several quaint ponds, magnificent water fountains and a majestic clock tower, Chatuchak Park is a favourite among locals, thanks primarily to its location in a much quieter part of the city.

The 3km wide asphalt running route meanders past eye-catching sculptures, themed gardens, and along bridges across the lake, offering runners an undulating landscape for a unique running challenge. Towering trees provide shade along the trail, while vendors scattered throughout sell affordable refreshments. Besides the numerous fitness facilities for public use, including tennis courts and football fields, there are benches set throughout the park to allow runners a moment’s respite.

Open from 4:30am to 9pm, an additional attraction of Chatuchak Park is it is set within walking distance of the Chatuchak Weekend Market, making it an attractive place to visit before or after a lively day of shopping. 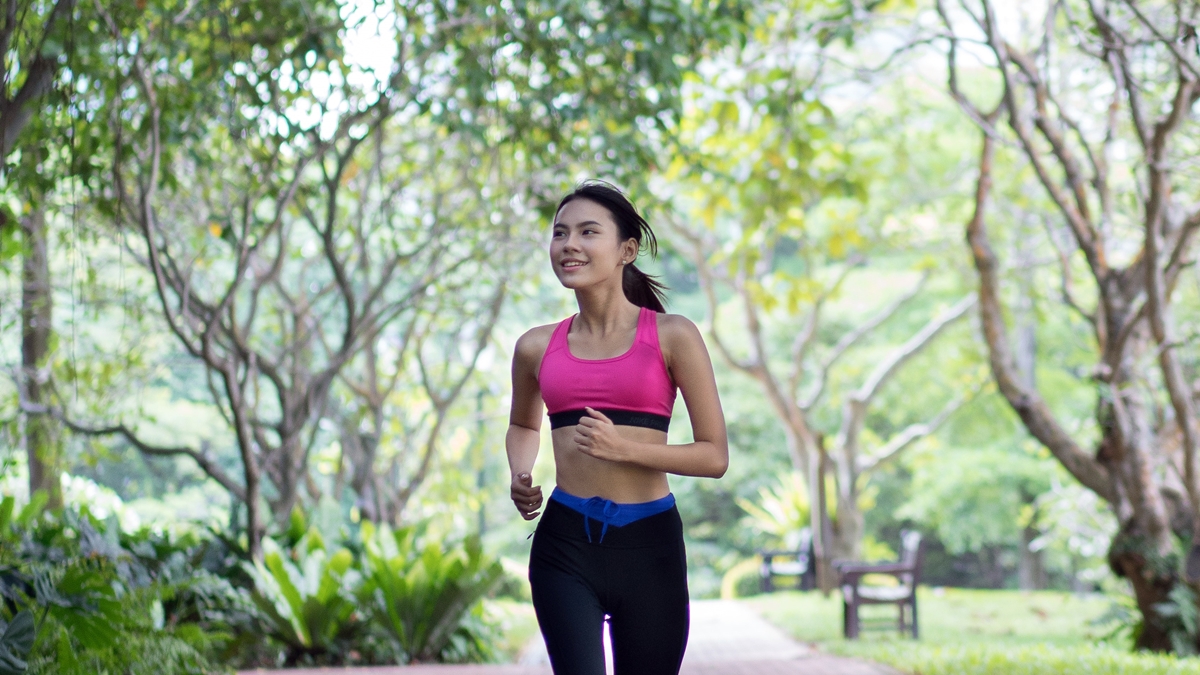 Situated right next to Emporium shopping complex in the bustling Phrom Phong district, Benchasiri Park is a lush green lung that is just a two-minute walk from the Phrom Phong BTS station. Opened on August 12th, 1992, Benchasiri was built to commemorate Queen Sirikit’s 60th birthday, and is often referred to as the ‘Queen’s Park’ by locals.

A peaceful refuge where you enjoy a few hours of quiet, the entrance of Benchasiri Park is filled with a thick forest of trees, a promise of what you can expect inside. The 700-metre running track borders the central lake, where a colossal water fountain offers colourful water shows at various times throughout the day. Along the route, you’ll pass kids’ playgrounds and exercise fitness stations. Thai-style pavilions overlooking the lake offer respite from an intense running session, while local vendors sell refreshing drinks and snacks to re-energise you after your workout.

You can also enhance your running in Bangkok experience by hunting down the twelve sculptures dotted around the park, designed by local artists. Open from 5am to 9pm, Benchasiri Park is a wonderful haven that showcases the city’s more relaxed side.

An eight-acre haven of leafy greenery in the centre of the busy Victory monument section of the city, Santiphap Park is a godsend for those in this area seeking some tranquil serenity. Opened in 1998, and named to commemorate the end of World War II, Santiphap translates to ‘peace,’ and that is what runners will experience as they make their way around the park’s shaded path that totals a distance of 1km. One of the park’s many attractions is the bronze sculpture located in the central pond, depicting a dove carrying an olive branch with five types of blossoms. The sculpture was based on a Pablo Picasso drawing, and the range of blossoms represent peace spreading throughout the world.

Music is another big attraction of this park, and runners will be able to enjoy soft jazz instrumentals playing from speakers set on golden-tipped poles strategically placed along the route. For a scenic rest break, runners can check out the covered greenhouse featuring a variety of flowers, or try and spot one of the 30 species of birds that have been seen fluttering among the lofty trees. Open from 5am to 9pm daily, Santiphap Park can be reached by a pleasant five-minute walk from the Victory Monument BTS station.

Located directly opposite of the Queen Sirikit National Convention Center (QSNCC), Benjakiti Park is one of the best places to relish views of Bangkok’s towering cityscape. The park is a more recent addition to Bangkok’s crop of parks, having only opened in 2004 in honour of Queen Sirikit’s 72nd birthday. The park was part of a government initiative to improve the ‘livability’ of Bangkok, by creating more green spaces in the city.

By far one of the prettiest places to go running in Bangkok, the 1.8km trail circles the whole breadth of a breathtakingly beautiful lake, bordered by colourful flowers, where you can catch visitors paddling in swan-shaped boats. The sleek, high-rise buildings of Sukhumvit are seen reflected in the lake, so you will always enjoy uninterrupted views of the city, no matter where you run. The best part is Benjakiti park boasts a separate bike lane, so cyclers won’t interrupt your run as you get your routine exercise in.

Other park attractions include an eye-catching semi-circle terraced courtyard that’s great for a mid-run rest, grassy slopes sheltered by low-hanging palms, and two one-of-a-kind fountains. One fountain sits on an elevated platform surrounded by marble walls, while the other resembles a waterfall, flowing over ridges in a sloped wall.

Running along one side of Ratchadaphisek Road, Benjakiti Park can be accessed by both the BTS and the MRT transport systems, and is open from 5am to 9pm daily. Take the MRT directly to the Queen Sirikit National Convention Center station, or if you prefer riding the SkyTrain, the park’s main entrance is less than ten minutes from the Asok BTS station.

Catch up on all our latest news to stay ahead of the curve.

Book
SO/ BANGKOK
Book your stay Exclusively for our Le Club Members

Eager to plan a trip to Bangkok, but worried in case your plans don’t follow through?

Now you can enjoy peace of mind and unrivalled flexibility when you book a stay with our ‘ Book Now and Pay Later’ room promotion, which puts us ahead of the majority of Bangkok hotels. Simply reserve any of our stylish themed rooms and delight in the privilege of paying for your room when you arrive at our 5 star hotel in Bangkok. Most importantly, we offer free cancellation, in case of any sudden change in your travel plans, so booking a room with us is risk-free.

Discount privileges
– 15% discount on a la carte SoSPA treatments (not applicable for promotions)
– 40% discount on Facial or Body treatments in the birthday month of member.
– 20% discount at Beauty Salon (Style Paris)
– 20% discount on food only at Chocolab, Red Oven, MIXO, The Water Club and Park Society.
– Complimentary car parking for 4 hours

*This offer is valid for new member who purchased on this flash sales campaign only.

The best of SO/ with Accor App Close
X
SO/ BANGKOK